The Maya Have Visited Throughout the World, Many Times

The word MAYA is found all over the world. Most of us think of the Classic and Post-Classic peoples by the same name, who flourished in Mesoamerica from well before Christ till they were conquered by Cortez in the 1500's. It appears they have assimilated into and influenced many other cultures in the world as well. Maybe there is, a greater plan for the earth slated for 2012 and beyond.

I have included this quote from Jose Arguelle's book, The Mayan Factor: "Maya is a key Hindu philosophical term meaning "origin of the world" and "world of illusion." The word Maya in Sanskrit is further related to concepts meaning "great", "measure," "mind," "magic," and "Mother." Maya is the name of the mother of the Buddha. In the Vedic classic, the Mahaharata, we read that Maya was the name of a noted astrologer-astronomer, magician and architect, as well as the name of a great wandering tribe of navigators. The treasurer of the renowned boy-king of Egypt, Tutankhamen, also had this name. In Egyptian philosophy the term Mayet means universal world order..." And, it goes on...

There's an Aboriginal tribe in Australia by the same name with their own distinct language. They are located in the area between Mt. Magne and Dalwallinu.

Maya, which also could be know as Quixito, is a language spoken in Brazil. It's thought to be one of the Panoan languages from Peru, western Brazil and Bolivia. Or, it could be part of the Mayoruna, "water people," language an indigenous tribe in the Peruvian and Brazilian Amazon.

In Hindu mythology, Mayasura was a great ancient king of Asura, Daitya and Rakshasa races. He built his capital and called it Maya Rashtra. Krishna instructed him to construct a fabulous palace hall, which became the Mayasabha, renowned, beautiful and the largest of its kind.

Maya is also the Buddhist goddess of dreams. She represents the principal concept which creates, perpetuates and governs the illusion and dream of duality. These thoughts of separateness are a mistake and temporary. But they seem very real to most of humanity who are stuck in the thought that the physical with it's different objects and peoples is the only reality.

"Each person, each physical object, from the perspective of eternity is like a brief, disturbed drop of water from an unbounded ocean. The goal of enlightenment is to understand this - more precisely, to experience this: to see intuitively that the distinction between the self and the Universe is a false dichotomy. The distinction between consciousness and physical matter, between mind and body, is the result of an unenlightened perspective." World Religions, Jefferey Brodd.

In Hinduism this illusion is to be seen through, like an epiphany in order to achieve liberation of the soul from the cycles of karma. It is this karma that binds us to the earth.

"These ancestors (our Grandparents) were known by various names depending on where and when they visited. In Africa they were called Mayax. In Hindustan, they were called Naga Maya; others, like the Greeks, called them Cara Maya." Secrets of Mayan Science/Religiion, Hunbatz Men

Many of the letters used in Mesoamerica have Universal meanings.

The most notable are the "G", the "T" and the "O". To the Maya "G" represents beginning, the germination, the essence, giver of life. The Milky Way is associated with the source of this beginning. "T" symbolizes our oneness with the natural environment. Nature was our teacher or guide with it's own mind or consciousness. The sacred tree, the Ceiba represents our unsevereable connection to the divine. "O" or ol is awakened consciousness and vibration.

The linked symbols "G" and "O" finds similar meaning in the Hebrew word Geova (Jehovah). The Tower of Babel mentioned in the Bible was a center of "confusion" because of all the different languages. Babal or babel means "confusion" in Mesoamerica.

"Euclid, the Greek philosopher, played a part in the influence of the Maya in Greek culture. In the year 403 B.C., this philosopher helped reform the language then in use by introducing Mayan elements." Secrets of the Maya Science/Relgion, Hunbatz Men

Hunbatz Men takes this a step further. These letters tell a bigger story when combined. Here's a few examples: teol The essence of the consciousness of the tree. H'uayak' ol represents H "is masculine", uayak "to dream" and ol "consciousness." Those outside of consciousness or out of reality Hunab K'u.

If they were in fact spiritual avatars, as some feel, they could have assimilated into cultures anywhere in the world at will. This was to ensure the world would be in a position to for the next Great Cycle beginning around 2012. Their purpose was to educate and prepare as many cultures as possible for this earth-transforming event. The changes have already begun with the chaos we are experiencing right now in the financial markets, the environment and socially in the world.

This time is called the "time of no time", in Mesoamerica. it's known as the period of 20 years before a Great Cycle starts again. This time period is said to "cleanse" and "replace" the values of the present age with the new and different values of the next age, the Age of Peace. It's part of the Universal plan to raise the consciousness of the world. The next Great Cycle as well as the Grand Cycle begin again on December 21, 2012.

The the values of next Great Cycle must be assimilated in the next few years. Those values are love, unity and integrity.

The Classic Maya were believed to have enlightened members amongst them. The Post-Classic Maya came after them with a whole new set of traits and cultural beliefs. Their Spanish conquers had them write a book explaining the renderings on their buildings, stelae, vases and murals. It's believed they cleverly protected the originators and content of their coveted Council Book. Even to this day this book is either secretly, in the possession of elders or has disappeared completely.

Instead, they wrote about their Creation Myth, the Popol Vuh. All the characters represent cosmic occurrences from before 300 B.C. till December 21, 2012. This manuscript explains the precession changes that occur because of a tilt in the earths axis. It also shows how the ancient Mesoamericans once revered the Big Dipper as the Center of the Universe. As time continued they began to realize that through precession changes, the Big Dipper was moving out of their sight because of it's more northern orientation. 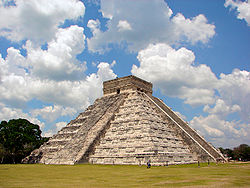 There are uncanny similarities in cultures that would never have crossed paths all over the planet.

Almost all of these cultures found a connection between the cosmos and the earth and made attempts to understand astronomy. Virtually, all cultures believe in a higher power greater than themselves, and used gods to explain phenomena that happened. Elaborate creation myths and myths in general are found everywhere in the world to continue cultural beliefs from one generation to the next.

To take this a step further, Joseph Campbell in his studies on mythologies around the world has found a reoccurring pattern between the worlds myths. Even the story of Christianity mirror that of other ancient cultures. The only true difference between them are the names, types of animals and the geographic peculiarities. The stories themselves are virtually identical.

It was these types of similarities that prompted the Mormon religion to claim Quetzalcoatl the man who lived in the 10th century was actually Christ resurrected in Central America.

Another common theme is king/shamans who went on spiritual journeys or quests into the past or future with the use of hallucinogens. The Egyptians, the Mound Builders of America, and the people of Mesoamerica all built ceremonial pyramid shaped structures or mounds. Couple this with the fact this word appears in many languages and geographic locations. Many cultures in America meditated in a lotus position similar to the Far East.

So what happened to take us so far and fast away from the ways of our ancient ancestors? What made us loose our close connection to our spiritual beginnings and the cosmos as a guide for phenomena that happened here on earth? Our separation from nature and the divine consciousness has made us fearful, anxious and unfulfilled. It has caused distrust, jealousy, and anger towards others, which has robbed us of our

Many feel we simply gave up on spiritual ascension and decided to make it on our own. Most just accept we live and die as best we can on the earth. They feel that's all there is and attempted to be happy. Technology flourished when we tried to be as comfortable and safe as possible while we did our time on earth.

But, of what were we protecting ourselves? Many would say it was fear of that ever persistent call from the Universe. That repetitious urging asking us to again listen to our inner voice and let go of our technological toys... forgive others and ourselves for mistakes. We all know there has to be something better than what we now experience.

Through our technological inventiveness we were able to live and flourish in the world as it is...till now. The economic, ecological, and social upheaval attests to the fact we can't continue in the direction we're going. Scientist say we are at the tipping point where the earth can no longer sustain our numbers.

Now, we're being asked to revisit and realign ourselves with our spiritual beginnings. To get back on track with the

the values of next Great Cycle and natural cycles of time, which have been in place since the beginning.

There is much we can learn from the past. Some of our true teachers... spiritual avatars have been here many times in an attempt to steer us in the direction of our True divine beginnings. They are called Jesus, Quetzalcoatl, Mohamed, and more. Their efforts had a greater purpose. That purpose was to show us the way back to our spiritual beginning.

In fact I'm sure these enlightened beings are here right now preparing us for the monumental shift in consciousness promised by many of our ancestors.

Use this link to get to the Home Page