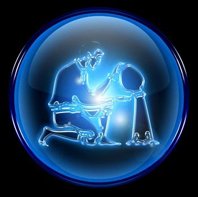 The Age of Aquarius is causing great turmoil in order to make room for the new values of love, brotherhood, unity and integrity. Everything with Piscean values is being exposed and taken down. This includes governments, corporations, individuals, and even personal relationships. Many call this a disaster, as the world appears to be falling apart, but is it?

The Aquarian Age points to the direction of our own evolution in consciousness. We are each being asked to make a choice. We can cling to the old outdated values or adopt the new evolving ones. Our happiness and peace depends on our choice and the change will take place whether we like it or not.

Most people today sense something unprecedented in our world will happen soon.

Prophesiers such as Edgar Cayce called for a "gradual change" starting in 1998 between the Piscean Age and the Age of Aquarius. He didn't call for a cataclysmic end. He also hinted that it's up to us through our actions and choices as to how much pain this change will bring. The intensity and end result of the cycle change depends on how we handle challenges in our live RIGHT NOW!

"It may depend upon much that deals with the metaphysical...There are those conditions that in the activity of individuals, in line of thought and endeavor, keep oft many a city and many land intact through their application of spiritual laws." Century, Edgar Cayce

It's uncanny how the Mayan Great Age and the Egyptian Age of Aquarius agree. These two ancient peoples were on opposite sides of the world with no physical contact.

Both the Aquarian Age and the Mayan Great Cycle appear to have begun at the same time, around 2012. One could argue that there was contact since the word "maya" also can be found in Greek text. What's interesting is both are based on precession of the equinoxes.

Scientists today confirmed the galactic alignment as the Maya predicted, "There's no question that one of the great cycles of the traditional ancient Mayan calendar comes to a completion of its count at that time in 2012," says E.C. Krupp, Ph.D., director of the Griffith Observatory in Los Angeles, California.

In fact, many scientists believe we should be paying closer attention to what the Maya predicted for our own sake. Hidden in their hieroglyphic text is the key to our own salvation, but we must open our minds to see it. The Maya calculated to the day the historic alignment on December 21, 2012 over 2,000 years ago.

"...our ancestors devised every method imaginable to alert us to a single fact; now is the time of the most extraordinary conditions and opportunities that accompany the rarest of events, the shift from one world age to the next." Fractal Time, Gregg Braden

What IS NOT found anywhere in their text is doomsday for the world. In fact, the Maya did everything they could to inform us of the great "window of OPPORTUNITY for spiritual growth" opening to us with this historic alignment of the earth, the sun, and the galactic center of the universe. The Age of Aquarius mimics the ancient Mayas prediction for the next Great Cycle.

Dehydrated produce makes a healthy food for snacks or on the run. The Excalibur Dehydrator is one of the best, because it has a thermometer to keep the temperature under 108 degrees to preserve the vital enzymes. This is my dehydrator, and my number one pick.

What does the Age of Aquarius or Aquarian Age represent?

"The Age of Aquarius is the Age of Freedom, Technology (especially electricity), and the Water Bearer."

The rapid changes in technology we've seen in the last number of years has been orchestrated by the universal, or divine, forces to prepare us for the next new age, the Age of Aquarius. Our technological boom was not because of our "superior" inventiveness compared to our ancestors, as some may think...It was all part of the universal plan to prepare us.

Another key trait of this new age is "humanitarianism without prejudice or preference." This could represent the emergence of pro-active intergovernmental organizations and unified global movements. Maybe we'll finally learn to work together for the betterment of the "whole" world as a unified unit. Now that's progress: when everyone, and everything wins!

We are all experiencing these trait changes now as we travel the path from Pisces to Aquarius.

The general consensus is an Astrological Age is about 2,150 years with some deviation because the earth's rotations vary in length. Another factor is the disproportionate sizes of the constellations.

This coming new era should usher in a period of group consciousness. Aquarius and Leo are polar opposites. As precession marches further into the Age of Aquarius, the "intensive self-consciousness of Leo" should expand into the "group awareness of Aquarius." In other words, the individual should become the universal while still maintaining individuality. Personal Identity will be lost for the good of the whole. Yet personal spiritual identity would remain intact.

It's a time to understand that WE are the spiritual masters we have been waiting for.

This is a time of the merging of the opposites, the masculine and the feminine. These two energies within each of us will once again work together to know God. And, they will act on divine inspiration, bringing messages from the divine to manifestation in the world.

As we think so shall we create.

In a new and developed consciousness everything will be given freely on demand to meet a need. Aware individuals will not conceive of lack. What we give out of love grows, not diminishes. We will become "spiritual beings having a human experience," instead of human beings having a worldly experience. Spirit and matter will merge and function as one.

By weight blue green algae is the most nutrious and complete whole foods on the planet. It will satisfy your hunger, boost your energy level, and clear your head.

It will be the feminine (receiver of divine inspiration), and the masculine (acting it out in the world), uniting as one unit...unquestioning...without altering messages from the divine.

It would be the end of selfish desire and the beginning of selfless free expression of the soul of humanity.

The radical social changes in the 1960s happened when the conjunction of the planet Uranus occurred. This is a planet ruled by the sign Aquarius and the coming New Age. This event represents the changes needed for the Age of Aquarius.

The major part of the change began in 1987 at the time of the Harmonic Convergence. A transition began at this time heralding increased spirituality and harmony among people.

The Indigo ,crystal and rainbow children are here to help us move towards the Age of Aquarius values of "love, brotherhood, unity and integrity." These children possess increased spiritual sensitivity, and have stronger ties to the upcoming values.

"...the sign Aquarius into which sign our sun is now entering, its three decanates, Saturn, Mercury and Venus, bringing inevitable difficulty, illumination and brotherly love. On the ordinary wheel (spiritually undeveloped man), in all outer affairs, Saturn controls, and we consequently find ourselves today in a state of chaos and trouble. But, as far as the consciousness of the race is concerned, Mercury is becoming increasingly active. A steady illumination is taking place and light is being thrown on all problems - light on government and politics through experiments and the study of great and basic ideologies; light on the material nature of the world through all the many branches of science; light on humanity itself through education, philosophy and psychology. This light is spreading down to the very darkest places in our planet and its many forms of life." Esoteric Astrology, Alice Bailey, 1975

What does the Christian tradition says about the Age of Aquarius?

Many feel that most of the human population will gain a deeper understanding  of the Christian teachings. It will be a time of truly living instead of just surviving. We will have access to deeper knowledge...a knowing that we haven't been aware of in this era.

"This age is regarded as an intermediary preparation toward the Christ in the etheric plane, the New Galilee; the "new heavens and a new earth" to come in a future not identified by time. In the Aquarian Age at hand it is expected a great spiritual Teacher to come ("will come"), through the school which works as a herald of this age, in order "to give the Christian Religion impetus in a new direction." Gleanings of a Mystic, Max Heindel

But some believe the spiritual teacher will come from within.

I too believe that Christ will come to awareness within those who seek the Inner Teachings. He has always been within us all, but will be KNOWN innately, by those who truly seek him with devotion.

"When the task of Saturn and of Mercury has been accomplished, then during  the third decanate Venus, which is the union heart and mind, will usher in the long hoped for era of love-wisdom, of brotherhood and of expressed brotherly relationships. Opportunity - Illumination - Brotherhood; these are the gifts that Shamballa is planning to confer upon mankind during the Aquarian Age, if man will but prepare for them, accept them, and use them. Only the future will make clear man's reaction." Esoteric Astrology, Alice Bailey, 1975

Wheat grass is super nutrition even in small quantities. Wheat grass nutrifies, and detoxifies the body of harmful toxins. I chose the hand crank Hurricane Juicer and love it. A good electric overall juicer is the Omega.

This quote that states the challenge of the coming Age of Aquarius:

"The tests and difficulties and pains of this era are symptoms or indications of the "entering into manifestation" of the new civilization and culture. They portend the birth of the new era for which the entire world waits. This will happen if - speaking esoterically - the sixth ray energy of Mars (lower chakra energy ) is transmuted into the sixth ray energy of Neptune (higher chakra energy), for the one is "objective and full of blood", and the other is "subjective and full of life." Esoteric Astrology, Alice Bailey 1975

So...if Alice Bailey, a master astrologer is correct, it will be up to us...all humanity...to decide which direction we take in the coming new age, the Age of Aquarius. It's in fact a choice...a personal one, as well as a collective one. Change always starts with the individual.

God after all in his infinite wisdom gave us Free Will. So, will we allow ourselves as a whole to be swallowed up in hate, greed, and prejudice? Or, are we tired of this yet? The other choice is to reach for the light and go in the new direction represented by the coming new Age of Aquarius of "love, brotherhood, unity and integrity."

Will we learn to live and work together for the good of the whole planet? Or, will we continue on the road of self-destruction we've been traveling now for some time?

I know some of you are thinking you are helpless to steer the change. But you're wrong! It can happen. All it takes is for you and I and the next guy to change our thinking and values to align with the coming new Age of Aquarius. Once the synergistic ball starts to roll, it will be unstoppable.